In addition to holons and quadrants, integral theory brings another useful concept to permaculture: states. Simply defined, a state is a mode or condition of being; its nature can be either baseline or altered. In order to bring the concept of states into permaculture, we have reframed the scale of permanence as the baseline state for a system, and expanded it as a model to include altered states. We need to know when a system enters into a chaotic state or how we can induce one, as this creates abundant opportunity to “Creatively use and respond to change.” And finally, while permaculture already makes us aware of states in the physical landscape, we also need to become aware of states in the mental/emotional and social realms.

A standard tool used in permaculture design is the scale of permanence. This scale of permanence, essentially a tool for mapping the physical world, helps us to organize the elements of our design in order of our ability to influence them, from least to most. Climate is the least influenceable and most permanent, then landform, water, access, vegetation & wildlife, microclimate, the built environment, zones, soil and aesthetics, each being more and more malleable in our designs. This scale gives our design a template so that we don’t design ourselves into a corner. A rather simplistic example would be putting vegetation ahead of climate: if you decide you want to plant mangos in the North American midwest, you will quickly find that come winter that was not an appropriate plant choice. Designing in the order of the scale of permanence would prevent you from making such a mistake. 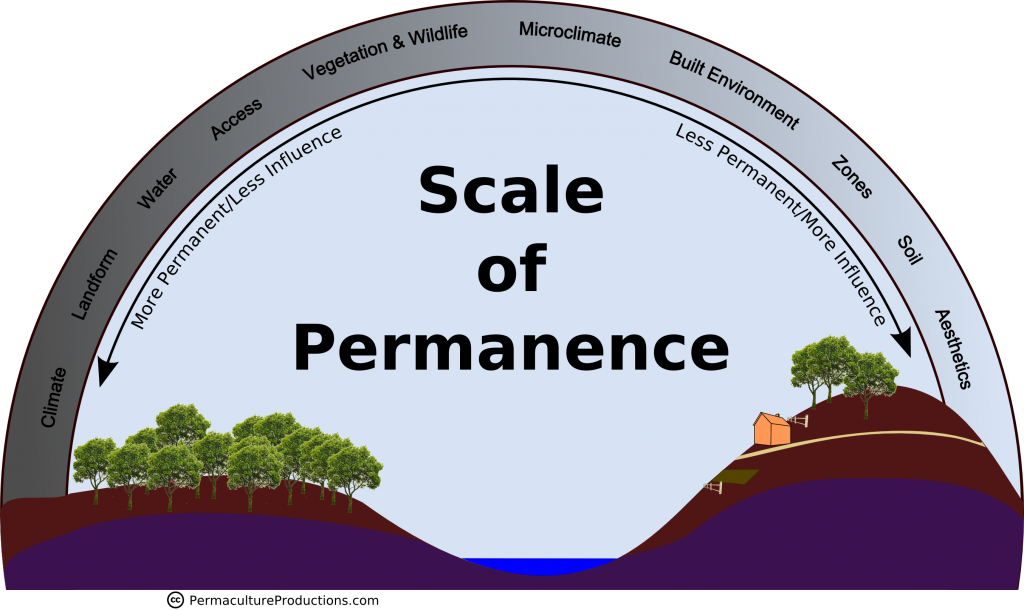 Since all of the aspects on the scale of permanence will change through time, what this tool can help us do is take a snapshot of the current conditions: in other words, to outline the current state of climate, landform, et cetera. The sum of all of these states makes up the baseline state of our design, which is the condition or conditions that the system will naturally tend toward. Knowing this baseline state is useful because it will be the basis for all of our future design decisions, which depend on how much energy we will need to use to make changes we want to see in the design. It also will help us to recognize when that baseline, once it has been established, has changed.

The baseline state is not actually a constant, permanent condition, but in fact the average of many different states through time. When a condition deviates far enough from the baseline state it can be considered an altered state, or even a peak state if it is at a theoretical maximum or minimum. These are events that may occur regularly or seemingly randomly and can cause a change in the baseline state, bringing the system to a new baseline as the altered state moves through the system. An example would be when a river floods, leaving the river’s path, banks and floodplain permanently changed. The amount of swing between between the baseline and the altered state will inform the degree of change between the original and the new baseline.

Sometimes altered states have cyclical rhythms, the cycles themselves becoming baselines. For example, the annual changes of seasons, phases of the moon, and regular patterns of monsoon and drought are all altered states that are effectively a baseline because of their regularly recurring nature. Even climate change is cyclical on a geologic scale – though it has also been influenced by one-off events, such as a volcanic eruption that spews sunlight-blocking ash into the atmosphere, or tapping into global carbon reserves to power a civilization. 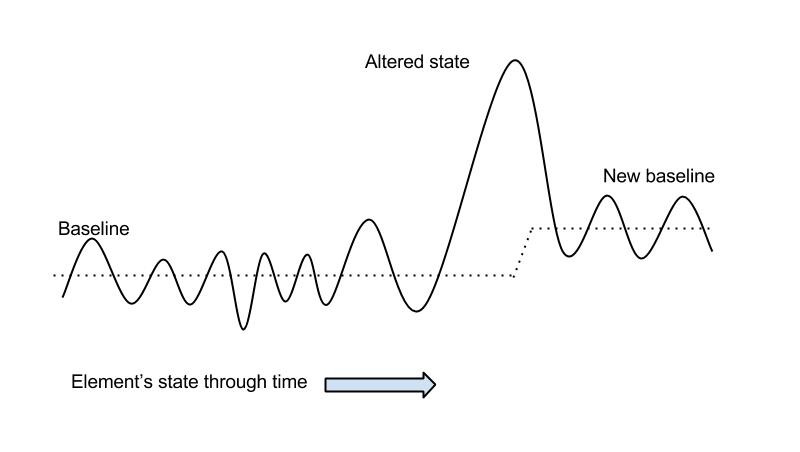 How do altered states fit in with the scale of permanence and permaculture? We need to expand the scale of permanence to include an awareness of potential altered states that could happen within and outside of our design. Knowing the potential for altered states can help the designer organize and size the particular elements of their design so that they don’t become overwhelmed and fail in an altered/peak state situation, possibly even to the point of absorbing or deflecting the impacts of that altered state entirely. For example, a flood (an altered state of water) might wash out individual roads, swales, plants, and even wash away soil. All of these elements could be designed to work together so that they slow down and harvest the water, ultimately changing the nature of a flood from that of an event which completely alters the baseline and depletes the system, to one which recharges the system with water. In this example, climate is the root cause of the flood, but the overall effect on the design is determined by other elements on the scale of permanence.

Of course, we will never be able to design for every altered state that may come to pass, and that’s where the chaotic state comes into play.

When our planning and preparation abilities are not enough, an altered state sends our whole design into a chaotic state. This is the point where one or more elements of the system becomes so altered that it throws the whole system into disorganization. Chaotic states are moments of great possibility that we can make creative use of if we are prepared to. Chaotic states can also be introduced to force a change in other elements of a system. Whether introduced or naturally occurring, the chaotic state can be a useful tool that allows us to more easily reorganize a system, but they can be even more destructive if they persist for too long. Keen awareness about the existence of a chaotic state and when it has reached the limits of its usefulness is essential.

The usefulness of the chaotic state depends upon the designer’s mindset. While there is a limit to being physically prepared for an altered or chaotic state in the design, theoretically there is no limit to being mentally prepared. While we can’t know what will happen in the future, we can cultivate the mindset that enables us to deal with whatever situation arises. This is eloquently stated in David Holmgren’s twelfth permaculture principle, “Creatively use and respond to change,” and its accompanying maxim, “Vision is seeing things not as they are, but as they will be.”

Adding in the Quadrants

As we have demonstrated above, in permaculture there is already an awareness of physical states that are relevant to a design, such as the natural change of seasons, weather and climate, and succession. These exist in an obvious way and are relatively known and tangible phenomena. Equally important to our designs are the states of the designer, other actors in the design and the social landscape that interacts with a particular site. People themselves have different physical and internal states: childhood, adolescence, adulthood and elderhood, emotions and moods, and sets of knowledge, experience, and cultural conditioning. Some social states might include local zoning and other laws, the local acceptance of a “messy” yard, and states of economic expansion or contraction. They even can have chaotic states, which may range from the death of a spouse or parent and loss of a job in the personal realm, to revolution, pandemic, or the loss of a local industry in the social realm. All of these states influence our human systems and should be appraised and accounted for in our designs.

To that end, the tools that we use to organize and document states in the physical/external landscape can also help us identify states in the social and internal realms. The scale of permanence – with a bit of imagination – helps us establish baselines in other quadrants. What is the social climate that we live in? What is your mental climate and ability to deal with change? What is the climate of the institutions that exist around you?

Another issue we may encounter is how to know when a baseline we’ve established reflects reality or is rather a projection of our personal perception of reality, which can be influenced by personal bias, cultural conditioning, or even misinformation. This is where the integral model really comes into play. Possible states can only be determined by our observations and available evidence, but the information available to two different individuals and can still be radically different, causing each person to interpret the state differently. This is why we need to gather many different perspectives as we craft our designs and leave room for the possibility of new ones that we may not have considered.

The point of observing and documenting our baseline, altered, and chaotic states, in the natural, social and individual realms is to both be able to plan for them and know when and how to intervene, if possible. How a design interacts with the rest of the world is just as important as how the design functions within itself; therefore bringing our attention to different states within and outside of our design in all the quadrants can truly help us achieve permanence.