Anyone who is seeking to make change in the world would do well to take a look at Donella Meadows’ list of leverage points, 12 places to intervene in a system. For us the real power lies in the ability to look beyond the direct effects of a decision to what would in essence be the effects of the effects. The increasing leverage we can gain from our decisions comes about because of tuning in to and actively designing with these radiating effects in mind. 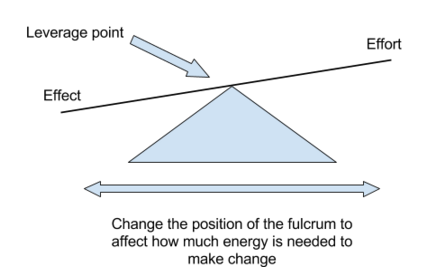 Numbers 1-6 of the Places to Intervene in a System are about changing the path you are on (inflection points), while number 7-12 are about how you are going to take the path you are currently on (smaller points of leverage along the same path). We’ll write more about this next time, for now take a look at the leverage points, read the article, and get a feel for what sort of decision each is and on what scale it is compared to the others.

LEVERAGE POINTS – PLACES TO INTERVENE IN A SYSTEM

(in increasing order of effectiveness)

12 – Constants, parameters, numbers (such as subsidies, taxes, standards).
11 – The sizes of buffers and other stabilizing stocks, relative to their flows.
10 – The structure of material stocks and flows (such as transport networks, population age structures).
9 – The lengths of delays, relative to the rate of system change.
8 – The strength of negative feedback loops, relative to the impacts they are trying to correct against.
7 – The gain around driving positive feedback loops.
6 – The structure of information flows (who does and does not have access to information).
5 – The rules of the system (such as incentives, punishments, constraints).
4 – The power to add, change, evolve, or self-organize system structure.
3 – The goals of the system.
2 – The mindset or paradigm out of which the system — its goals, structure, rules, delays, parameters — arises.
1 – The power to transcend paradigms.

There are several versions available, http://www.thesolutionsjournal.com/node/419 is more complete than some.

For further reading on leverage points check out http://www.thwink.org/sustain/glossary/LeveragePoint.htm.