First, I showed up to harvest microgreens Tuesday before Thanksgiving and ended up listening to J. H. Kunstler interview Chris Martenson.  Kunstler is a bit of a cranky but eloquent old man, Chris Martenson is behind the Crash Course and has sort of an investor/scientist take on things. 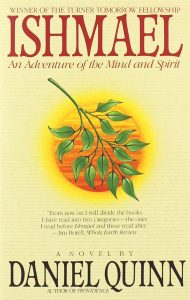 Now, a long time ago I had read Ishmael by Daniel Quinn. It’s a very good book and an easy read. The premise is an analysis the of the leavers vs. the takers, using the story of Adam and Eve to chart the move from a foraging to agrarian culture. I had forgotten about it but just recently had another of Quinn’s books, Beyond Civilization, show up on the Face, so I checked it out using interlibrary loan for some Thanksgiving reading. This one is a set of simple premises that build, asking how does one exit civilization.

At nearly the same time this Chris Martenson interview with Daniel Quinn appeared on my newsfeed. I’m particularly fond of this quote Chris pulls out from Beyond Civilization:

“If we go on as we are, we’re not going to be around for much longer. A few decades, a century at most, if we’re still around a thousand years from now, it will be because we stopped going on as we are.”  – Daniel Quinn, Beyond Civilization

So taken all together, I’m realizing these are excellent resources. A framing of the entire problem from Quinn contrasted with the mechanics of how it’s playing out from Martenson and a little cranky but eloquent old man thrown in for fun. I think I’m going to recommend this as one of my standard courses of study.

C. Milton Dixon is an permaculturist, forager, educator, and and all around computer savvy guy. He is co-manager at the emergent The Cooperative at Dawn Farm. You can reach him at or 773.789.8887. View more posts